Poisson Cru is French for raw fish. But as the local Mo’orean who told us about the best restaurant that serves it says, “the only thing French about it is the name.” It’s the traditional dish of the Society Islands, and much of Polynesia. We tried it in a restaurant run by a woman named Irene who, we learned, had special connections to the fishing industry. She was married to a fisherman. “I know all the fishermen,” she said, lording over the corner table where she enjoyed her restaurant’s food and red wine flowed generously. Perhaps the French had added something to the mix after all: the wine and the omnipresent baguettes on the island.

As with anything that’s good to eat, poisson cru has a specific sense of place. It’s a simple preparation, basically cubed raw tuna marinated and cured in lime juice until it’s translucent and then served in coconut milk with onions, cabbage, carrots, green peppers and green onions. It’s the freshness and flavor of the fish alone that makes the dish. I could think of a million creative variations to experiment with. Perhaps I’ll do so with some fresh local tuna bought off the docks back home in Oregon. Here I would be tempted to add some of the local pineapple, which is richer with less acidic bite than what we’re used to eating back in the States. Or maybe slices the tiny bite-sized bananas that have more of a citrus tang that what we find at home. 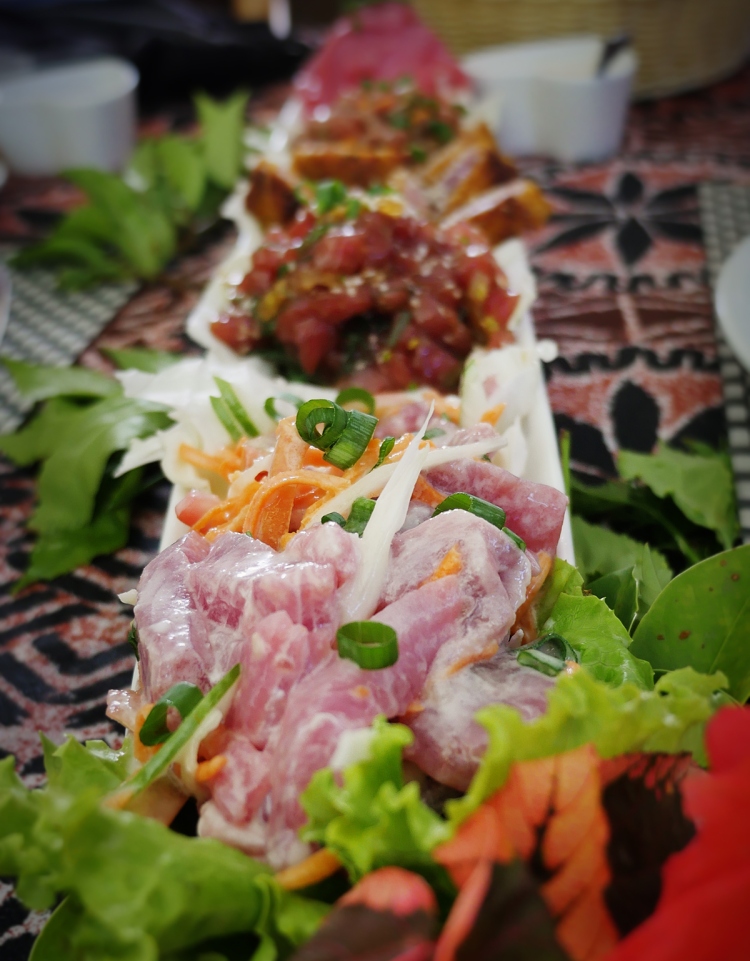 At Irene’s restaurant on the west side of the island, we sampled a pirogue or canoe that featured a number of different raw tuna preparations, including: poisson cru, two kinds of poke, thinly sliced filleted cuts and seared slices. It was all simple and wonderful. Fish tastes better on an island surrounded by vibrant blue water.

I’m currently on the island of Mo’orea, next to Tahiti. It’s a bewitching landscape of jagged, lush, forested peaks towering over pale blue lagoons. You can see it clearly from the air as you land in bustling and shabby Papeete on the neighboring island of Tahiti, the administrative capital of French Polynesia. Mo’orea is a reminder of what paradise is supposed to look like while Papeete is a warning as to what a paradise lost might look like.

It’s not lost on me to think that I’m here on business. Lucky doesn’t begin to describe it. It’s a lot of work making a film about a scientific topic, which is ostensibly why I’m here. But the kind of work I’m doing, which involves diving and taking pictures and interviewing people is largely what I’d do on vacation anyway. I’d do it if I had all of the money in the world and could wake up in the morning and select from a list of possible activities. And here I’m getting paid for it. Fairly incredible.

We’re documenting the work of scientists from around the world who are studying the coral reefs surrounding Mo’orea and other places like it around the world. This type of work is especially critical now because we’re losing coral reefs at an alarming rate. The work of these scientists helps us to understand why reefs disappear and what are the underlying causes. As I write this, the researchers are bracing for a global “coral bleaching” event, brought on by the fact that it’s an El Nino year, exacerbated by climate change. The event has already underway in the Northern Hemisphere and it’s relentlessly moving in this direction. The higher water temperatures, some of the highest ever recorded, is leaving entire reefs of once brilliant and multicolored corals devastated so that they look like boneyards. The corals wind up weakened or destroyed outright. Destroyed reefs mean that the fish leave. The shores of communities like those on Mo’orea are left exposed to punishing storms with out the protective fringes of corals. It’s bad stuff.

It’s a critical time for reefs. We’re adding more carbon to the atmosphere by the day. Every ton of co2 pumped into the air will stay there for thousands and thousands of years, elevating temperatures, increasing the acidity of the oceans, heightening storms, exacerbating the host of human-caused pressures that are threatening reefs. It’s demoralizing to think about.

And while it’s a disconcerting thought, that doesn’t take away from the fact that this is still a gorgeous place to work. I’ve had the privilege now of seeing places like this. It’s a selfish to think this way, but at least I’ve seen it. I’ve had a rare opportunity to see natural wonders that may someday not exist.

It’s lovely here. The fish, the bananas and pineapples are excellent. I will enjoy them guiltily while I’m here. Guiltily because my wife and daughter would love to be here but aren’t. Guiltily because places like this are growing fewer and farther between because of lifestyles we live in other parts of the world.

The world’s largest recorded bleaching event works steadily toward paradise. And maybe if we tell this story well, others will be motivated to help do something about it. What more could we wish for our children than a chance for them to someday discover something as lovely as poisson cru made from fish freshly caught past the sapphire spectacle of the lagoons of Mo’orea?