People express hospitality through food. When someone prepares a meal for a stranger, it’s a form of social grace. It’s what separates us from the animals and thus makes us human. Some might call it a spiritual act.

When someone feeds you four times in two days and gently prods you to continue eating until you’re stuffed to the gills…then the person is something more than merely human. It’s likely that the person is a grandparent.

Dobby and Lila Weigardt of the Long Beach Peninsula on the remote coast of southern Washington State became our crew’s adopted grandparents on a recent shoot to capture stories of the Willapa Bay oyster industry. It’s an industry facing dramatic changes. The Willapa Bay is one of the cleanest oyster fisheries in the world, but it’s fluid and dynamic. It’s facing outbreaks of predatory shrimp and invasive eel grasses. Silt from deforested hillsides is changing the composition of the bay’s bottom, which had been mostly sand in the past. They worry that pollution could flow out of the Columbia river and swing up around the arm of the peninsula to threaten the bay’s legendarily pure water.

Perhaps the greatest, and least controllable threat is that of the warming the seas and ocean acidification brought on by climate change. Researchers have linked changes in the ocean’s PH to difficulties with oyster set, a problem that local growers had been dealing with in recent years.

But the people of Willopa Bay are used to change. The tide retreats twice every day, dramatically transforming the landscape and exposing vast mud flats where the oyster and clam growers ply their trade. Storms sweep across the peninsula and topple the towering cedars. They’re a hearty breed, and they’re survivors; they’ll persist stubbornly no matter what changes they face.

Dobby has seen a lot of change over the years, and that’s what we wanted to hear about. He sat for an interview and spoke to us at length about the bay, and he arranged tours of highlights of the industry. He took our entire crew into his home, and he fed us.

Lila prepared soup, sandwiches, eggs, bacon, and pickled asparagus while Dobby fetched fresh vegetables and berries from his bayside garden, and wild duck, salmon and clams from his freezer. “We thought you’d want to know how we eat here on the peninsula,” he explained. He delighted in the clam fritters as Lila brought out plate after plate. “Wow, these are fantastic, Lila,” he said before digging in like the teenager he was when the couple met more than sixty years ago at Washington State University. A part of me suspected that this all was some elaborate plot to get his wife to fix his favorite dish. If it was, Lila didn’t seem to mind. She had the bearing of someone who takes more pleasure in seeing others well fed than in actually eating herself. 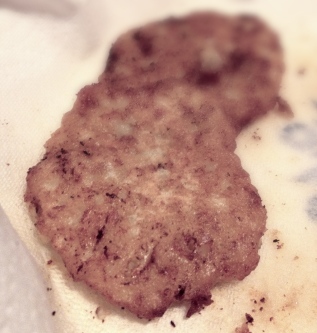 The local food brought the entire peninsula to life for me. It ceased to be merely a place where we were filming, and it became a place where we had lived. Eating in restaurants or out of supermarkets that all import food from far away don’t really help when you’re trying to get to know a landscape on multiple levels. That’s merely refueling. Eating in someone’s home is a form of communion. We were suddenly transforming from strangers into part of their family.

Dobby showed us his clam beds on the tidal flats that he owns beyond his house. At 86, he wakes up every morning to haul a thousand pounds of gravel out to the beds, one five gallon bucketful at a time, in his vintage Range Rover (purchased new in 1964). The clams prefer graveled flats to those choked with mud and seaweed. The work seems to have kept him spry. It was hard to keep up when he dashed into the woods on a side trip to see some massive cedar trees downed by a recent storm.

You can’t always count on someone adopting you, but when you’re a filmmaker it seems to happen from time to time, and it always adds to the story when it does. My grandparents are gone, but I couldn’t help but think of them when I looked at the old photos on their walls and the vintage clock on a corner shelf, stacks of duck hunting magazines and the gentle pressure they applied when urging us to eat more of their local bounty.

“We sure enjoyed having you boys here,” Lila said as we prepared to leave. At 43, I’m delighted whenever anyone calls me a boy. I need to hang out with more octogenarians.

Dobby gave us a box of zucchini as we loaded the van with our gear, preparing to leave. We exchanged small talk and he showed us an old wagon trail just beyond his driveway. He seemed reluctant to see us go.

“If you’re ever up here again, come back and see us,” Dobby said, as if the thought had just occurred to him.

Here’s the video I shot with Justin Smith and Daniel Cespedes, edited by Justin: